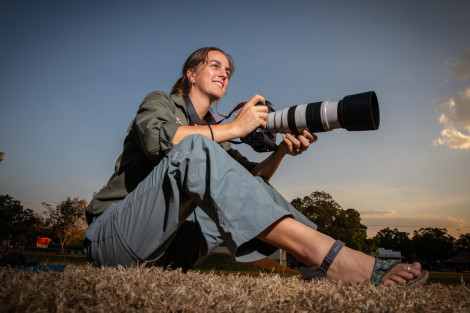 Sarah has a professional background in Ecotourism Development, Interpretation, Biological Sciences, Guiding and Environmental Education. Sara has worked in World Heritage national parks in Sarawak (Malaysian Borneo), North Sumatra (Indonesia) and the Northern Territory (Australia) for the past decade.

Birdwatching adds another element to Sarah’s passion for wildlife, sustainable travel and exploring remote and indigenous communities. Luke and Sarah have started birding around the world from – Sri Lanka to Dubai, Scotland to New Zealand and across Australia, helping to shape your sustainable tourism experiences. When seeing a new bird for the first time, Sarah really enjoys stopping in the moment and looking around her to see where birdwatching has taken them this time. Sarah joins large and international tours when possible, but most of the time is busy working behind the scenes to create your memorable tour experiences.

Sarah began training as an interpretive nature guide in the World Heritage national parks of Kakadu and Cape Range (Ningaloo Reef), while completing a Bachelor of Ecotourism, Biological Sciences, at Flinders University South Australia (2006). Her eyes were opened to the exciting world of birds and ecotourism whilst learning the ropes on the famous Yellow Water wetland cruises in Kakadu and joining albatross-spotting pelagic trips off Southern Australia. These amazing birds just had to be ‘ticked’ and more national parks had to be explored.

Sarah spent the next 4 years exploring remote and cultural lands around Asia, 2 of which she worked in ecotourism and sustainable tourism development roles with indigenous guides and environmental education counterparts in the World Heritage Gunung Mulu (Malaysian Borneo) and Gunung Leuser Ecosystem (Sumatra, Indonesia).

Sarah returned to Australia in 2011 and migrated to the tropical Northern Territory to study and work in Australian national parks. Surrounded by over 300 bird species, 8 major tropical habitats, ancient living aboriginal cultures, as well as being on the door step of Asia, Sarah and Luke thought starting a birdwatching operation together in Darwin was a pretty good idea.